Based on the Law Concerning Reporting, etc. of Pollutant Release and Transfer Register (PRTR Law), the Kuraray Group in Japan surveys and ascertains the annual emissions of chemical substances subject to PRTR Law and reports the results to the national government. The Kuraray Group similarly discloses on its official website, etc. emissions of chemical substances not only covered by the PRTR Law, but also designated by the Japan Chemical Industry Association (JCIA). In addition to them, persistent organic pollutants (POPs), volatile organic compounds (VOCs), hazardous atmospheric pollutants (HAPs) and particulate matter (PM) are considered to be chemical substances and Kuraray is taking action as explained in the table.
Environmental Data

The Kuraray Group in Japan had made a major capital investment by around 2008 to reduce chemical substance emissions, and has achieved about an 80% reduction compared to fiscal 1999. Since then, we have set limits on the amount of Japan Chemical Industry Association (JCIA)-designated Pollutant Release and Transfer Register (PRTR) substances* based on the concept that even if the scale of business expands, the environmental impact outside the production sites will not be increased from the base year. To achieve this target, when we consider construction of new production facilities, we examine and carry out investment projects with consideration of measures to prevent an increase in chemical substance emissions. In fiscal 2020, emissions by the entire Kuraray Group in Japan totaled 805 tons (742 tons into the atmosphere and 63 tons into water areas), achieving the target of less than 957 tons, partly due to reduced production caused by COVID-19. Going forward, we will continue to take measures to prevent further emissions outside of our production sites.

The annual policy of the Kuraray Group outside Japan is to continue to comply with the environmental regulations of the respective countries and regions where each production site is located and to conduct quantitative control. Until fiscal 2017, emissions were on an upward trend due to the incorporation of businesses and the construction and expansion of production facilities. However, emissions have been decreasing since fiscal 2018 due to measures such as the expansion of exhaust gas treatment equipment and the improvement of operational control. Emissions in fiscal 2020 were 449 tons, almost the same as the previous year.
※Substances subject to the PRTR Act and substances designated by the Japan Chemical Industry Association 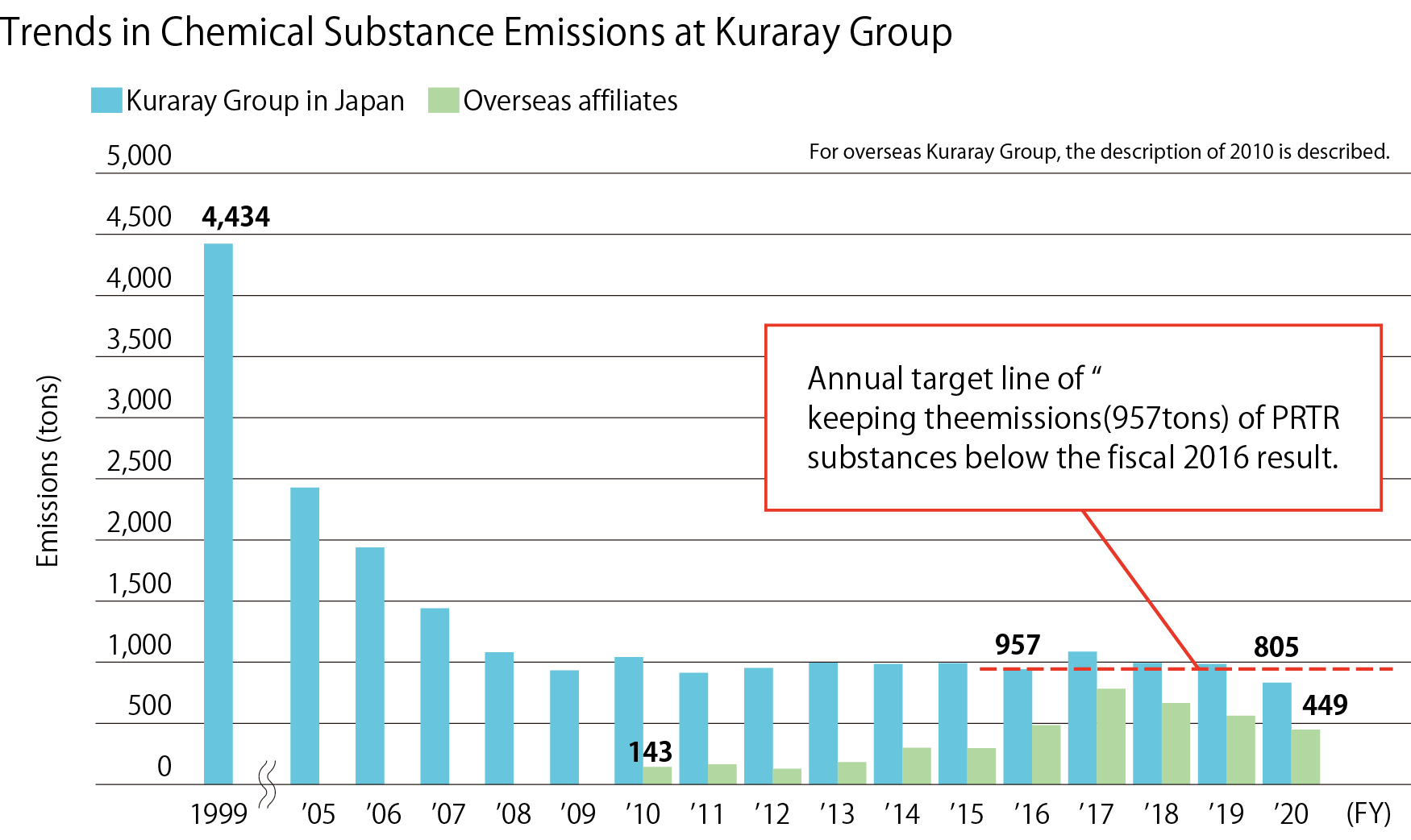 Reduction and Effective Use of Waste, and Reduction of Landfill Disposal

The amount of waste generated by the Kuraray Group in Japan in fiscal 2020 decreased by 3,300 tons from fiscal 2019, to 88,500 tons. This was due to a drop in production as a result of the impact of the COVID-19 pandemic, in addition to our continued, steady measures to reduce waste generated, such as improvement of product yields, sorting of waste, and recycling of waste into raw materials through collection at each production site and affiliated company. In fiscal 2020, we achieved our target of implementing measures to reduce waste by 900 tons or more (at least 1% of the amount generated in fiscal 2016), to 2,486 tons. As a result of our efforts to effectively utilize most of the waste generated through recycling and energy recovery, the effective utilization rate was 96.8%. On the other hand, the amount of landfill disposal in fiscal 2020 was 616 tons (the final landfill disposal rate was 0.7%), an increase from the previous fiscal year, and we were unable to achieve the target of 251 tons or lower (the actual value in fiscal 2016). This was attributable to the fact that some specially controlled industrial waste was no longer treated by waste service companies for effective use, and that waste plastic recycling overseas has become difficult due to restrictions on the export of waste. We will continue to take measures to cut the amount of waste generated and strive to reduce the amount of landfill disposal by searching for waste service companies who can use waste effectively.

In addition, the volume of waste generated by the Kuraray Group outside Japan increased due to the acquisition of the vinyl acetate business in 2014 and Calgon Carbon Corporation in 2018. In fiscal 2020, the volume of waste generated decreased by 6,000 tons from fiscal 2019, to 75,700 tons due to the impact of COVID-19. Each production site complies with its own country’s legal requirements and strives to reduce waste generation through yield improvement and intensity index improvement activities. We will continue to work on reduction measures such as optimization of operating conditions and recycling.

The Kuraray Group including its oversees affiliates is not engaged in production activities in areas in which water resources are scant and where our business activities significantly affect the water sources of such areas. However, there is pressing demand for water resources worldwide, and we will continue engaging in corporate activities while recognizing these resources as being vital.

In fiscal 2020, the volume of water intake (except seawater) of the Kuraray Group in Japan totaled 72.0 million m3 per year, almost the same as those in fiscal 2019. Even though Kuraray production sites in Japan are well located in terms of water resources, we believe that it is necessary to conduct business activities by considering the long-term prospects for water supply, such as the risk of a water shortage caused by climate change due to global warming. We continue to reuse water by recovering heat from heated effluent and reusing coolant water for boiler water. We will keep track of water consumption trends while continuously reducing our water consumption and effectively using water resources.

The water consumption of the Kuraray Group outside Japan has been increasing since fiscal 2014, because we incorporated new businesses through M&A both in the vinyl acetate business and due to acquisitions, such as Calgon Carbon Corporation. Water consumption in fiscal 2020 remained almost the same as the previous fiscal year, but the water intensity index (excluding seawater) fell below the target, decreasing 4.6 percentage points from the previous fiscal year partly due to reduced production caused by COVID-19. 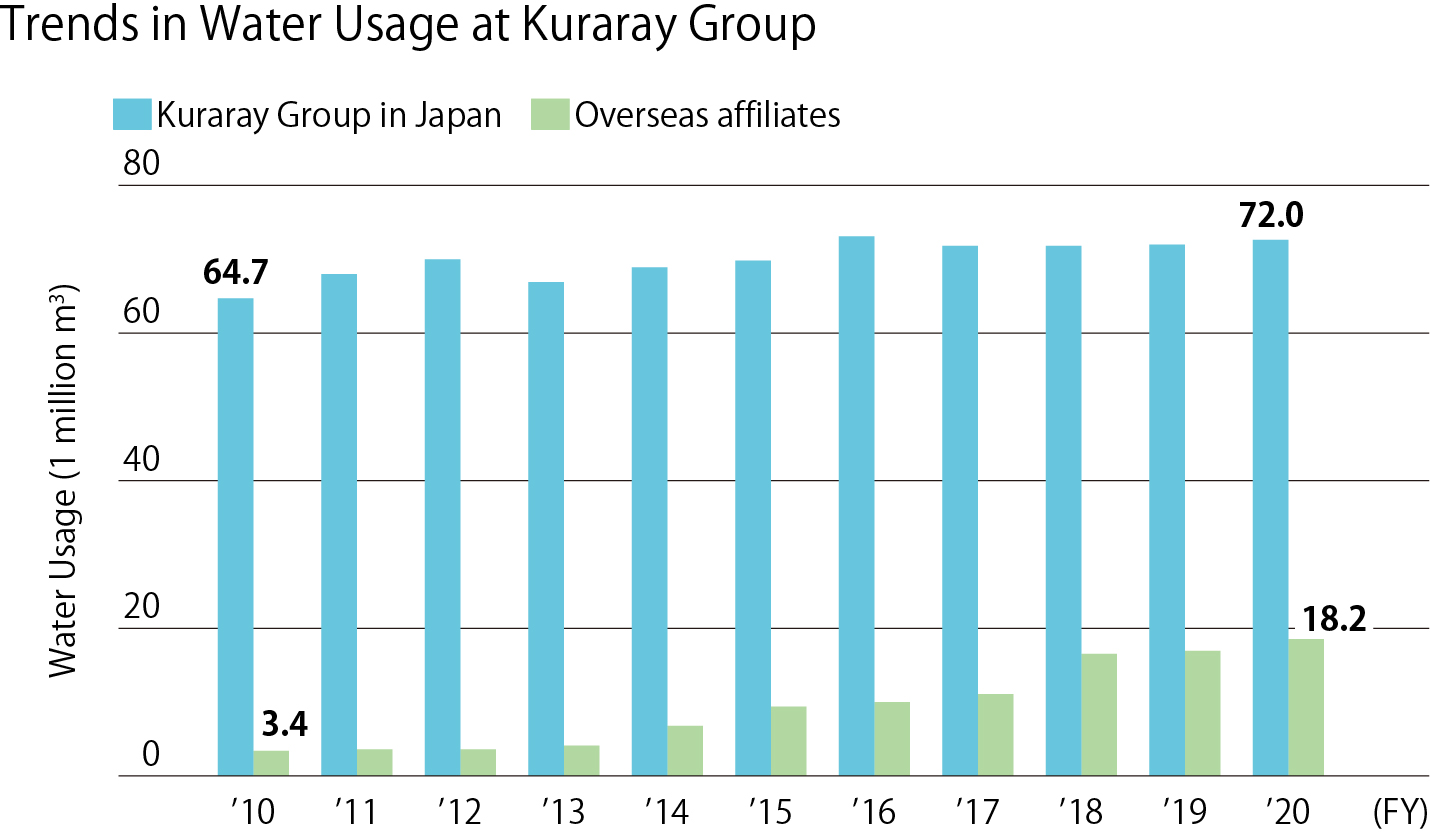 The Kuraray Group believes that continuing our efforts to implement measures in global warming prevention, control of chemical substance emissions, reduction and effective use of waste, and effective utilization of water resources will lead to biodiversity conservation. We formulated the Action Policy for Biodiversity Conservation and have been promoting activities and the development of technologies and sale of products that contribute to biodiversity conservation. For example, employee volunteers at some Kuraray plants engage in forest conservation activities, cleanup activity, and endangered species protection activities, in cooperation with local governments and others. (Refer to examples of environmental conservation activities.) In addition, Kuraray’s ballast water* management system, MICROFADETM, contributes to biodiversity conservation. After obtaining type approval certification from the Japanese government in 2012, we received International Maritime Organization (IMO) type approval certification and United States Coast Guard (USCG) type approval certification for our new equipment (MICROFADE IITM) in 2020, and are continuing to upgrade it. The International Convention for the Control and Management of Ships’ Ballast Water and Sediments which came into effect in 2017 requires ballast water treatment equipment to be installed on all internationally operated vessels in sequence. Our MICROFADETM has been attracting attention for its potential contribution to biodiversity conservation.