The Kuraray Group in Japan has been conducting CO2 reduction activities such as increasing biomass fuel volume, using waste plastic as a fuel, ensuring higher operating efficiency, installing energy-saving equipment and steadily performing energy-saving activities. In fiscal 2018, we implemented measures to reduce GHG emissions by 13,000 tons-CO2e (cumulative total reduction of 174,000 tons-CO2e since fiscal 2011), and achieved our targets. As a result, total emissions were 1,320,000 tons-CO2e, which was 10,000 tons-CO2e less than in fiscal 2017. However, we fell short with regard to another target for our GHG emission intensity index, decreasing by 3.5 percentage points compared with fiscal 2017. While total emissions have been reduced, a drop in production volume (converted production volume) made an impact on the results.

On the other hand, the energy consumption of group companies outside Japan was 595,000 kL (crude oil equivalent). This was due to the acquisition of Calgon Carbon Corporation in March 2018, a rise in capacity utilization at production sites, and an expansion in the production capacity of existing equipment. The energy intensity index (excluding Calgon Carbon Corporation for the sake of comparison with fiscal 2017) improved by 3.6 percentage points compared with fiscal 2017, and thus we achieved our target. This result was greatly impacted by production process improvements carried out in some sites, as well as reduction in losses due to production equipment downtime through increased capacity utilization and therefore greater production volumes. 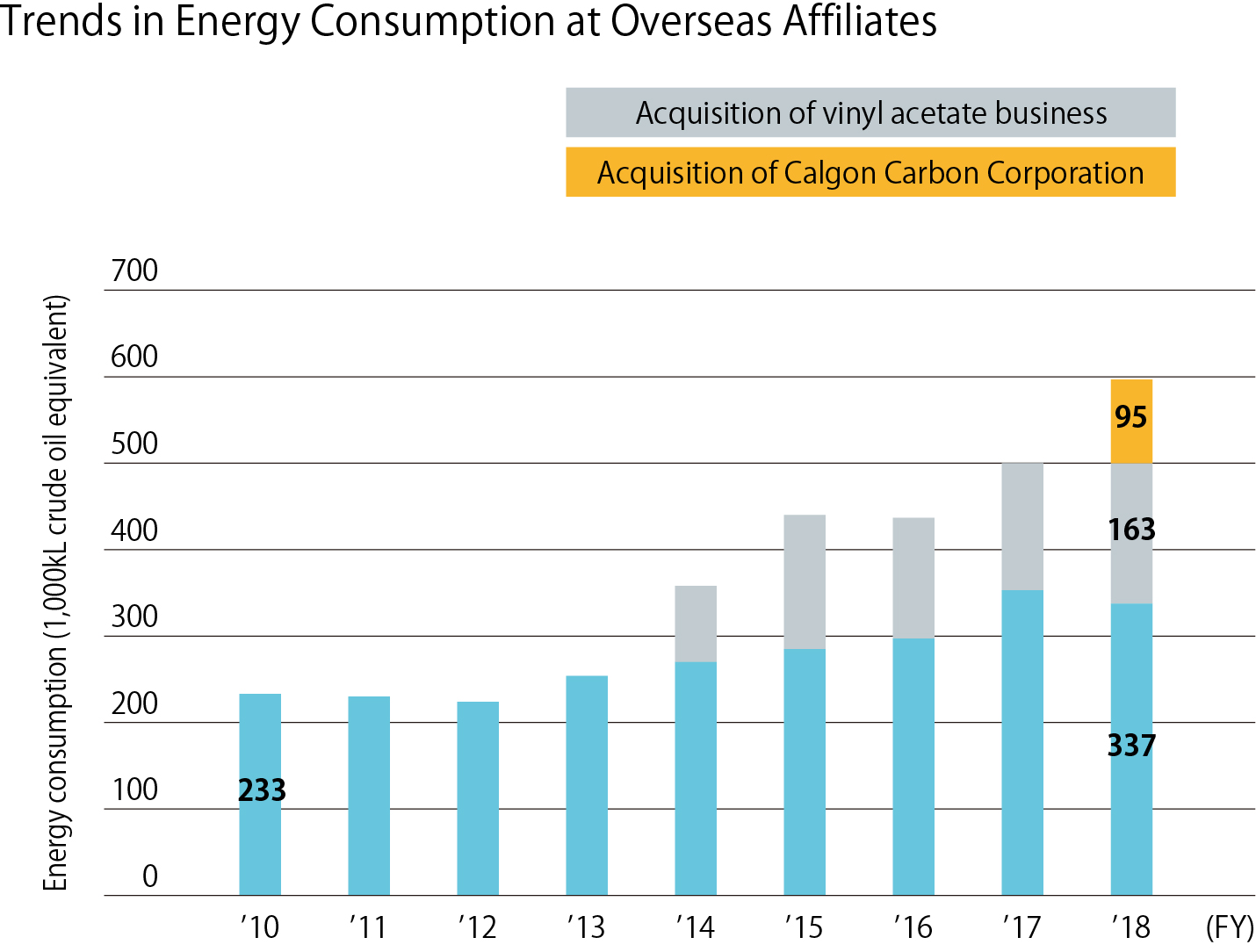 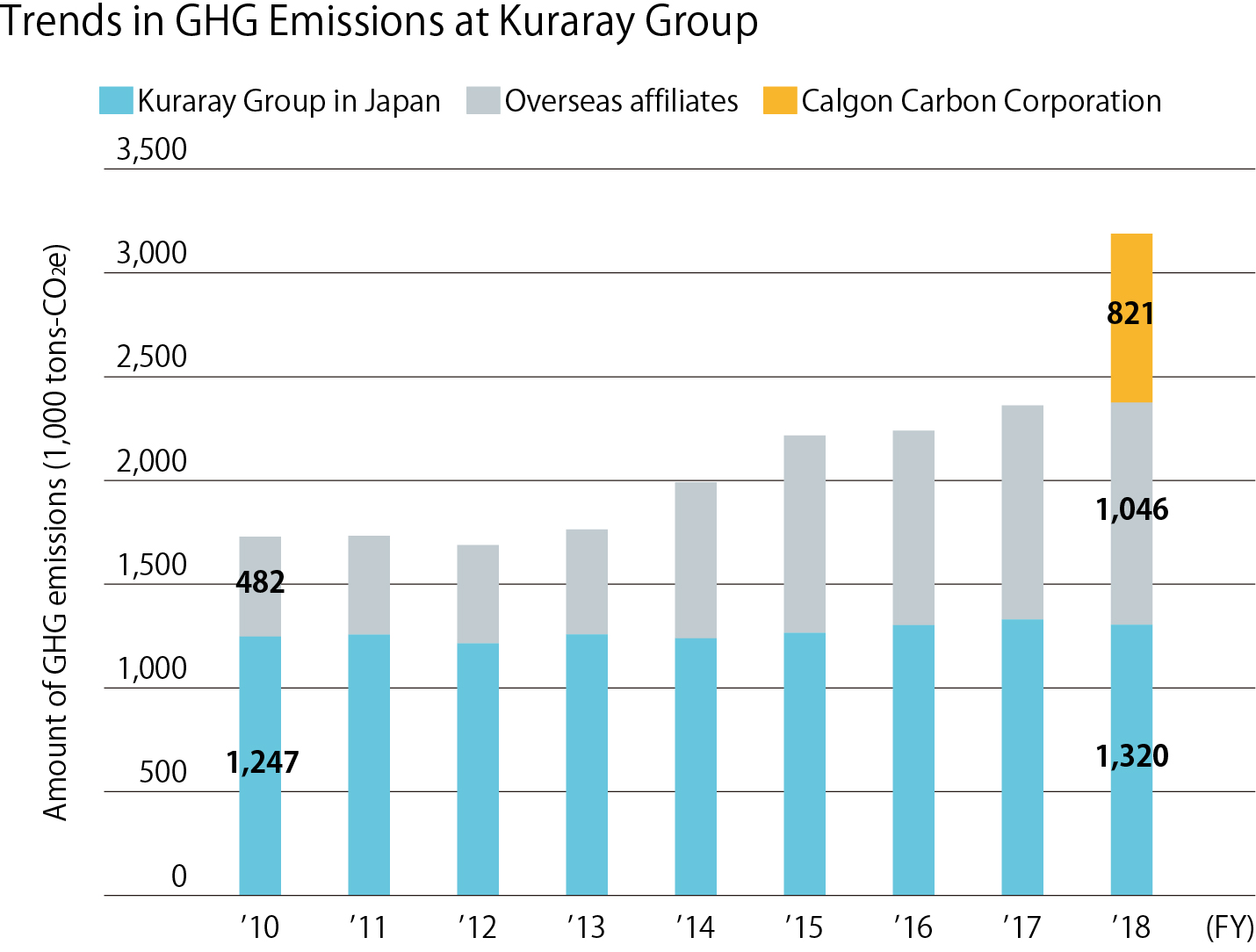 At Kurashiki Plant of Kuraray in Japan, biomass fuel* (wood chippings from construction debris and other sources) has been used as a substitute fuel of coal and the consumption of biomass fuel has steadily been increasing. In fiscal 2018, about 47,000 tons of biomass fuel was consumed, contributing to a reduction of about 71,000 tons-CO2e in its emissions. The Kuraray Group will continue its activities to increase the ratio of biomass fuel consumption.

* Biomass takes CO2 in from the atmosphere as it grows, and can be considered to emit no CO2 when the CO2 that is generated when burning lumber using biomass as a raw material is subtracted from the CO2 that is taken during its growth.

Kuraray is also reducing its environmental load in the distribution stage of delivering its products to users, in addition to GHGs emitted by itself during the manufacture of products at its plants and other facilities. Kuraray is continuously active in the “modal shift” where the transportation means is changing from trucks to cargo trains, ships and other methods. As a result, its emissions of GHGs in FY2018 were reduced to 13,000 tons-CO2e.

Mandated under the law by which businesses voluntarily calculate and report Scope 1 and Scope 2 to the government, we have been reporting these to the government and publishing the results in our CSR Report and elsewhere.
On the other hand, Scope 3 means the GHG emissions based on the entire supply chain related to Kuraray. We can understand how the indirect GHG emissions are generated from the viewpoint of a life cycle such as raw material procurement, product distribution, product use and disposal as well as the direct emissions related to Kuraray’s business activities. Kuraray has continued making Scope 3 calculations since fiscal 2013.
Among the 15 categories in the total of Scope 3, we calculated actual values for fiscal 2018 for 5 categories [(1) to (5)] with a relatively large emission amount, excluding those not applicable to Kuraray and those having a limited calculation coverage in the products of Kuraray. We will also continue quantifying our environmental contribution based on evaluations on the life cycle of Kuraray Group products.