We in the Kuraray Group consider the sound and sustainable advancement of society to be a precondition for corporate growth and prosperity, as well as the ultimate objective of corporate activities. It goes without saying that we see it as our duty to contribute to society through provision of products with genuine value to the people. Beyond this, we consider assistance with the resolution of social issues within an appropriate scope to be another important form of social contribution in our capacity as a corporate citizen.

The Kuraray Group carries out activities focusing on culture, science, environment and social welfare in accordance with its policy for social contribution activities.

To fulfill its responsibilities as a member of society, the Kuraray Group shall make vigorous approaches to social contribution activities in accordance with the following policy.

The Kuraray Group continues supporting the Ohara Museum of Art, which was established by Magosaburo Ohara, the first president of the company. The Group also supports cultural activities at its plants and sites. 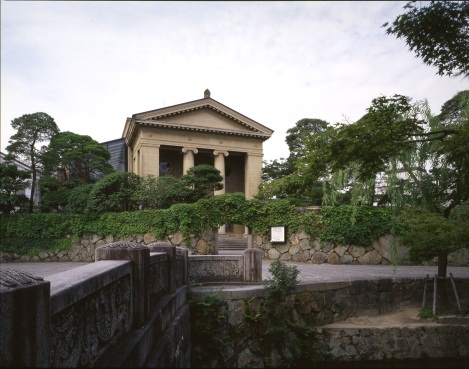 The Ohara Museum of Art 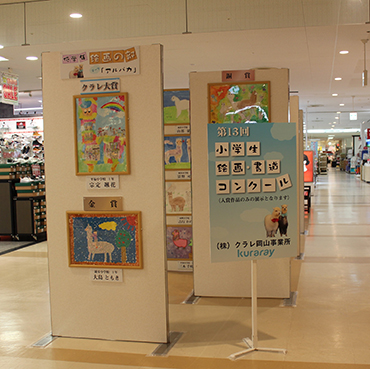 Contest on Painting and Calligraphy at Okayama Plant

Okayama Plant has been holding the Elementary School Student Painting and Calligraphy Contest annually since 2005. Having been well recognized in the local community thanks to its ongoing successes, this contest received 200 artwork entries, including paintings, pictures, and calligraphy, from five elementary schools near the plants in fiscal 2018. This contest will be continuously sponsored.

The Kuraray plants sponsor the “Chemistry Classes for Boys and Girls”, and participate in outside events and sponsored sports tournaments to foster healthy juniors and teenagers by continuously supporting on-going activities.

Kuraray conducts the “Chemistry Classes for Boys and Girls” program with the goal of enabling elementary school students to experience the fun of chemistry through experimental work. In this program, employee volunteers of Kuraray serve as lecturers and assistants in dedicated classrooms in Kuraray plant premises, as well as in elementary schools and public facilities in the areas. This program has been sponsored every year since 1992 at Kuraray plants in Japan. In fiscal 2018, 442 children and family members participated in fourteen class events. Kashima Plant participated in the Kamisu Festa held in Kamisu City. Kuraray’s booths were visited by 60 people. The Tsurumi Plant had a booth at the Bizen Industrial Festa, and showcased decolorizing experiments. We will continue these events and actively participate in events outside the Company. 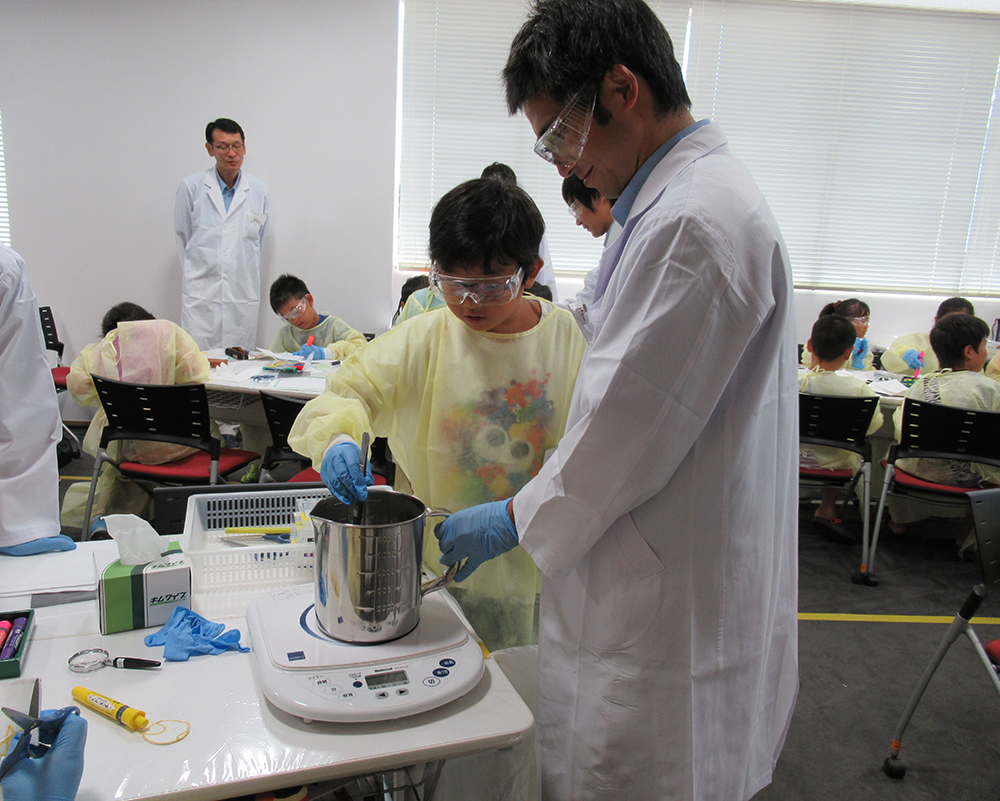 Various plants of Kuraray are sponsoring sports events from the standpoint of fostering healthy juniors and teenagers. Various sports and other events were hosted at the plants of Kuraray. Kuraray is offering its baseball parks, gymnasiums and tennis courts to students of nearby schools for the promotion of sports in neighboring areas. These activities will be continued in the future. 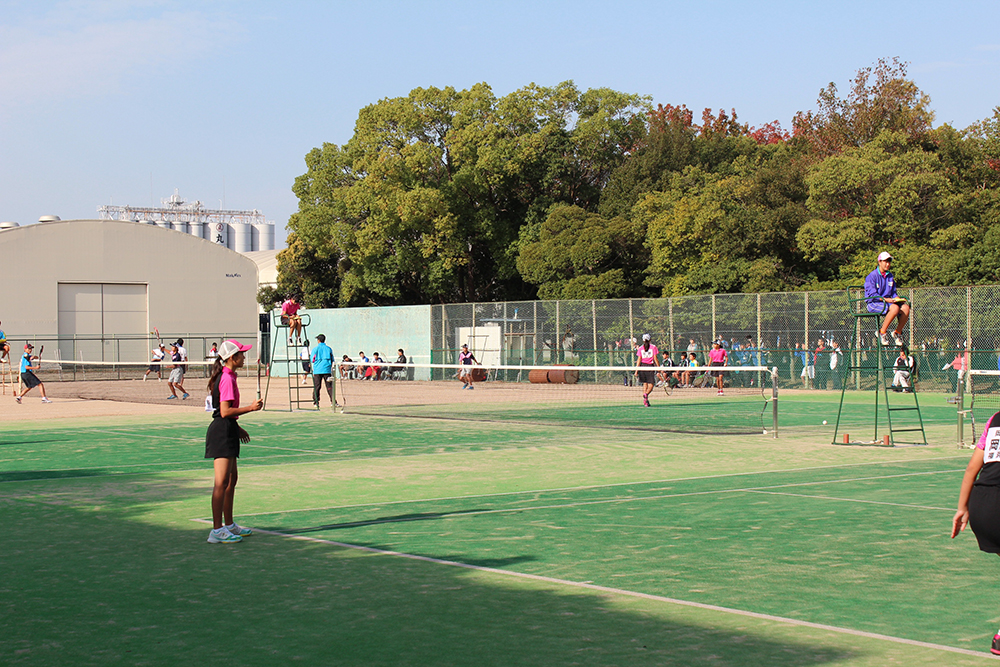 Aiming at implementing forest conservation work and volunteer cleaning work carried out every year, the Okayama Plant undertakes the “Kuraray Mirai no Mori (Kuraray Forest of Future) Activity,” and the Niigata Plant undertakes the “MIRABAKESSO Forest Creating Activity.” All the plants undertake continued volunteer cleaning work. The Group companies also periodically undertake voluntary environmental work such as cleaning of areas around their plants. 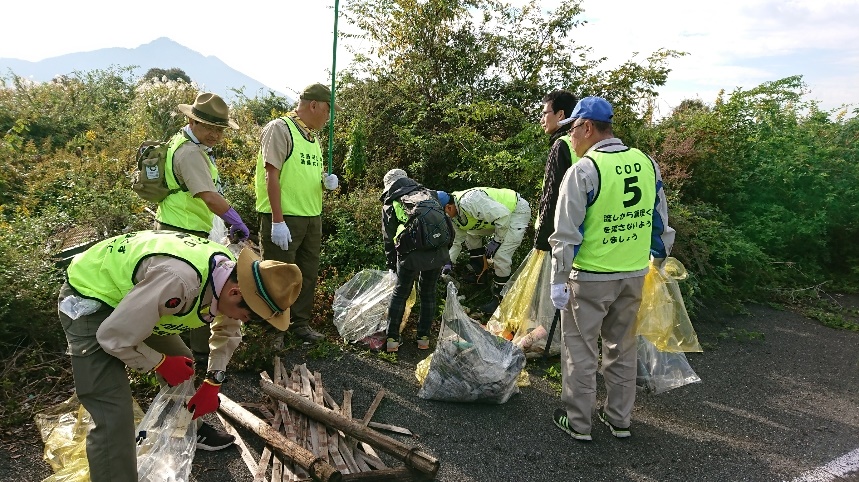 Aiming to support and continue the employment of people with intellectual disabilities and to undertake the Kuraray Fureai (Rapport) Fund-Raising Campaign, Kuraray’s Kurashiki, Saijo, Niigata and Kashima Plants operate workshops and donate money raised in the campaign. Also, cherry blossom viewing parties were held at the Saijo and Niigata Plants tuned to the cherry blossoming season. Residents of nearby social welfare facilities visited the plants and enjoyed viewing cherry blossoms. These activities will be continued.

In cooperation with Nakajo Town (currently Tainai City) and Niji no Ie (meaning ""Rainbow House"", operated by a social welfare corporation, Nanaho-kai) , the Kuraray Workshop of Kuraray’s Niigata Plant opened in 1997 for people with intellectual disabilities. The workshop sorts plastic waste generated in the production process for recycling and manufactures supplies and fittings. In 2007, the Himawari Sunflower Workshop opened at Kuraray’s Saijo Plant. In 2011, the Kashima Plant opened its Aozora Blue Sky Works assisted by a social welfare corporation, Kamisu Keiai-en. 12 instructors and 44 workers now work at four of Kuraray’ s plants to accomplish a variety of job assignments, including those employees at Kuraray’s Kurashiki Plant engaged in cleaning of uniforms and labeling on Kuraray products. They mingle with Kuraray’s employees through sports events and other occasions. These workshops and employment of those with intellectual disabilities will be maintained and continued. 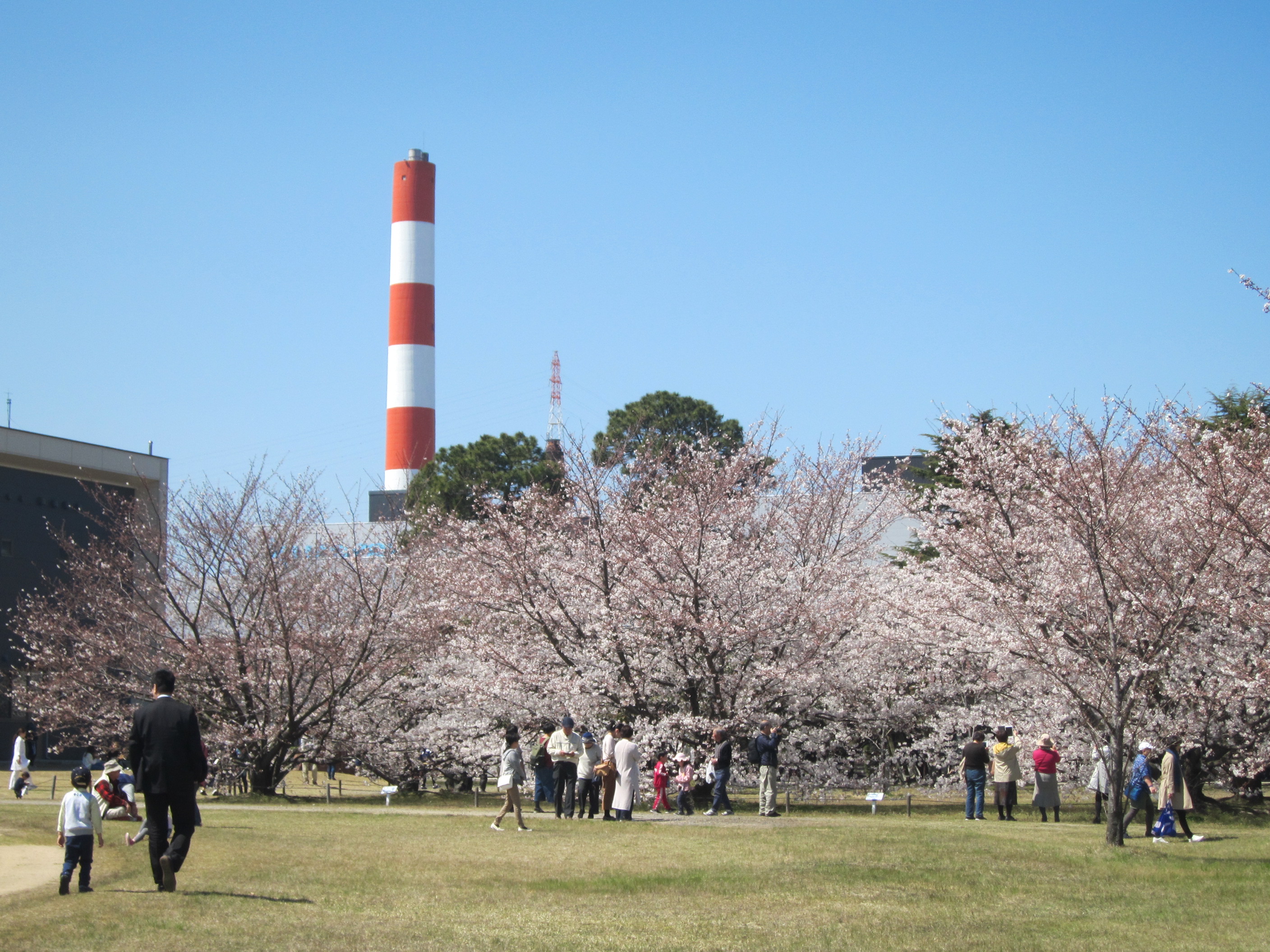 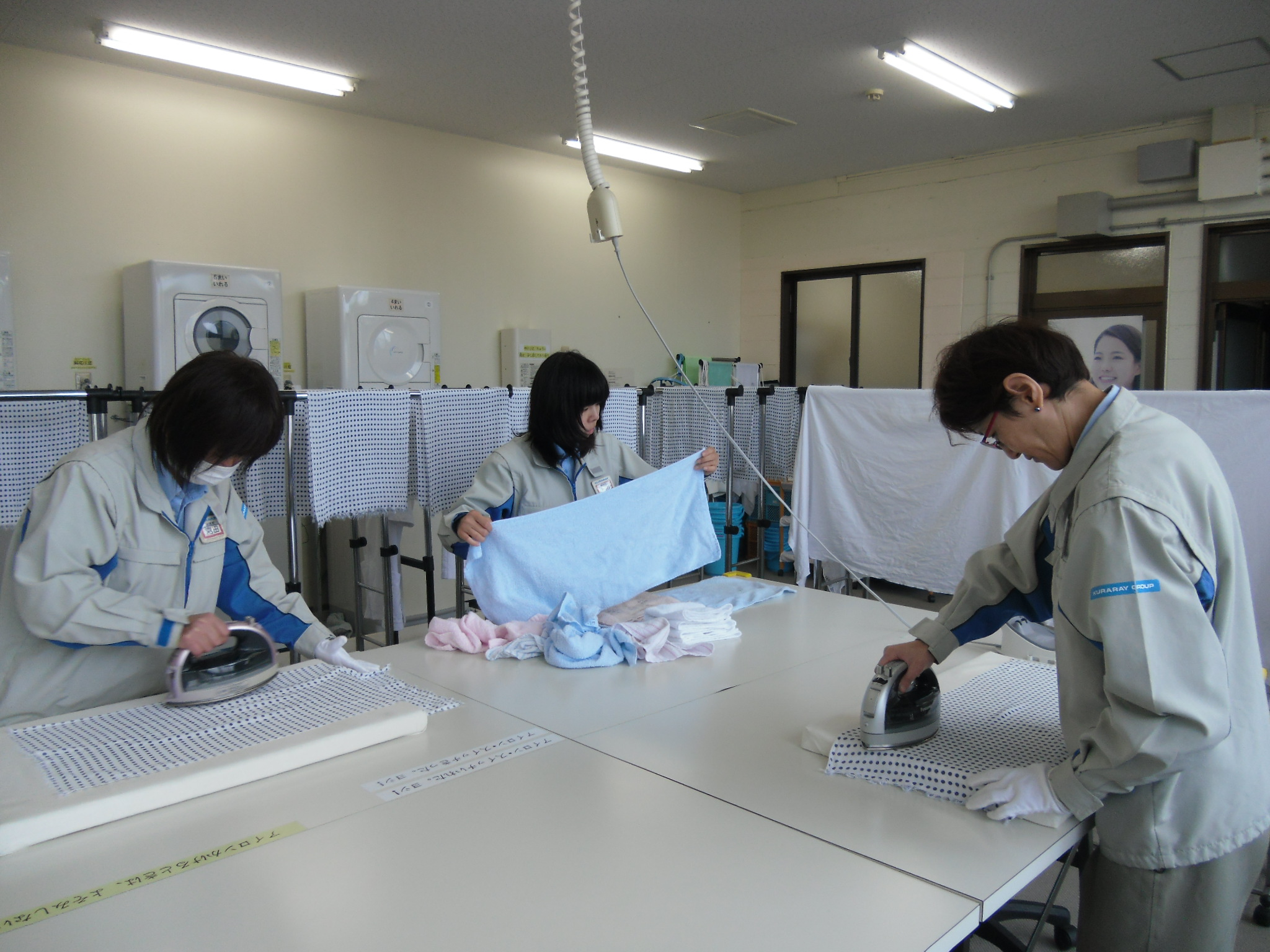 We established a matching gift or the “Kuraray Fureai Fund” in July 1992. Under this fund, companies make donations consisting of those made by their employees and the same amount by the company. Employees endorsing the fund agree to donate amounts of less than 100 yen from their salaries to it. The funds collected in this way are used for social welfare programs. We undertake activities that contribute to local communities, such as donating nursing care supplies, books and other articles mainly to welfare facilities, local governments and schools in the neighborhoods of Kuraray plants. The fund will be continuously used for the sake of social welfare. 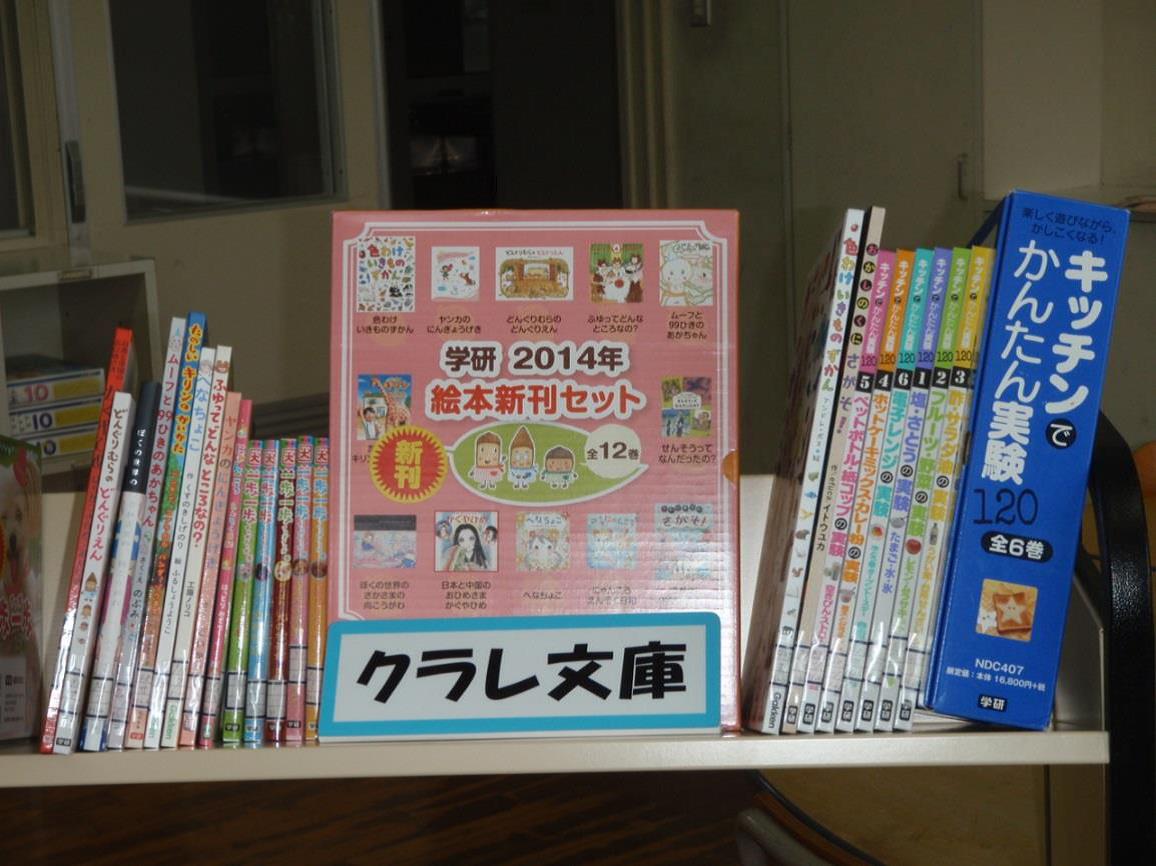 Charity
Kuraray America supports the activities of a non-profit organization called Bring Hope Home. This organization works to provide support in terms of living costs for families with children suffering from an illness, so that these families can focus on caring for their children. Kuraray Europe participates in a campaign called Gift for Hope, putting toys, clothing, and candy into gift boxes and sending them to disadvantaged children in Eastern Europe. The plant also participated in “Cycling 1000 km Against Cancer” and collected donations. In addition, Trosifol employees in Russia worked to repair facilities at kindergartens, sent them items needed for raising children, and gave Christmas presents to children in low-income households.

Initiatives to Spread the Fun of Chemistry
Kuraray America offers chemistry classes to children in regional areas. Participants experienced the fun of chemistry by making slime and kaleidoscopes using PVA. Employees also volunteered to conduct plant site visits and hold explanatory sessions on our businesses. Kuraray Europe invited a teacher and 18 students from a regional school to its PVA plant in the Industriepark Höchst. This was organized as the students attend the equivalent of high school and wish to specialize in chemistry in the future. The students heard an explanatory talk from the plant manager on the general details of PVA production, and took a tour of the plant. One participant commented, “I now have a much clearer picture of my career as a potential future chemist.” 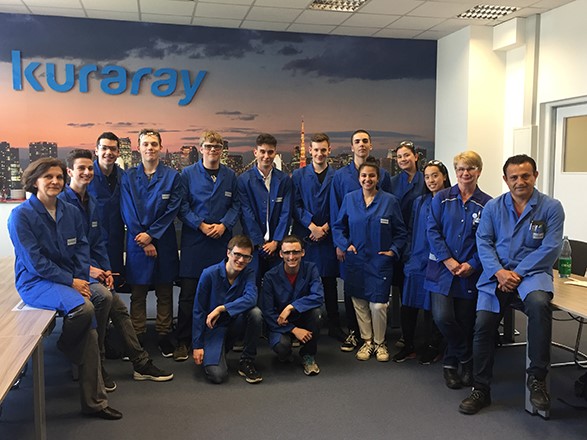 Focus on the “Sending School Backpacks Across the Sea” Campaign

"Sending School Backpacks Across the Sea” is an international contribution activity in which school backpacks used in elementary schools in Japan are sent to children in Afghanistan and other areas, who are deprived of education opportunities by war. The backpacks are donated every year together filled with stationery and letters. Up to now, these backpacks have been sent to Afghanistan, Mongolia, Nepal and Cambodia.

On the 15th anniversary of the campaign that was launched in 2004, 8,076 school backpacks were donated in fiscal 2018 from various parts of Japan. In cooperation with JOICFP, a public interest incorporated foundation, the school backpacks were sorted and packed by volunteer groups and the employees of Kuraray Group. From October to December the school backpacks were sent with school supplies to 46 elementary schools in Nangarhar Province, Afghanistan. Many volunteers cooperated in shipping them via oceans. So far, a total of 120,055 school backpacks have been sent as presents. Kuraray wishes to expand this contribution activity to other countries in the future.