Kuraray Co., Ltd. (hereinafter “Kuraray” or “the Company”) believes that the maintenance of appropriate relationships with various stakeholders and the fulfillment of social responsibilities through establishing a corporate governance system that ensures effective and fair management would contribute to the long term and sustainable enhancement of corporate value.

The Company has adopted the governance system as “a company with the board of corporate auditors.” Under this framework, the Company has established corporate governance mechanism centered on its Board of Directors and Board of Corporate Auditors to improve the effectiveness of supervisory and monitoring mechanism while maintaining management efficiency and to handle issues including management remuneration, selection of new company officers, internal control and risk management.

Through the above establishment of mechanism, the Company believes that the effectiveness of supervisory and monitoring mechanism would be improved while maintaining management efficiency, contributing to the long term and sustainable enhancement of corporate value.

The Company has worked continuously to strengthen corporate governance by taking steps such as separating supervision and execution functions through the introduction of the Executive Officer System, appointing and increasing the number of Outside Directors and Outside Corporate Auditors, establishing the CSR Committee and the Risk Management and Compliance Sub Committee, evaluating the effectiveness of the Board of Directors, and establishing the Corporate Advisory Committee.

The Company will further strengthen the corporate governance system through measures such as managing compliance risks in its overseas operations. 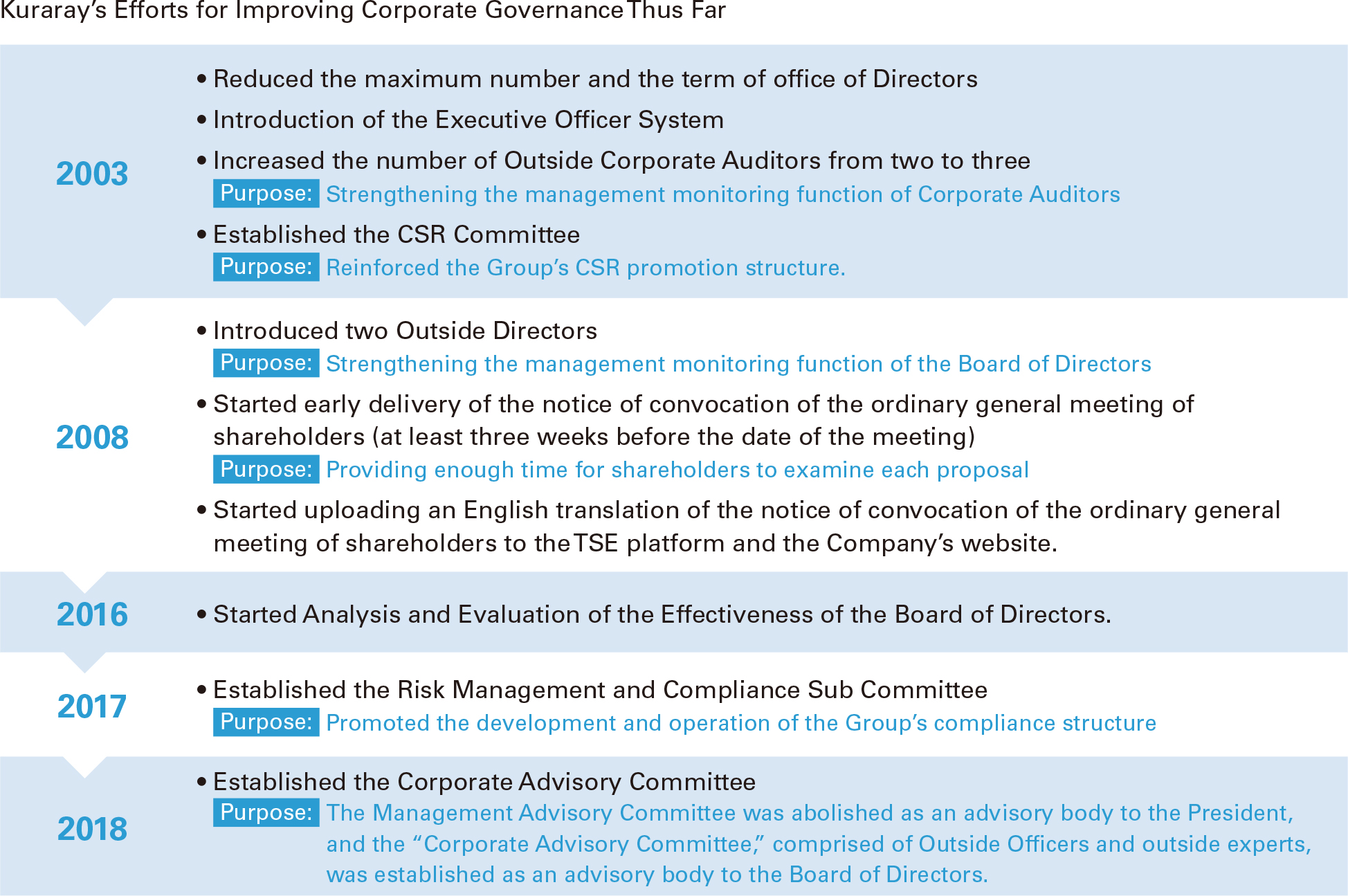 Board of Directors and Business Execution Body

As the chief executive responsible for business execution, the President appointed by the Board of Directors exercises control over the execution of business in the Company and its subsidiaries (hereinafter “the Group”). Every executive officer (one-year term of office) appointed by the Board of Directors is responsible for business execution in the Group organization. As the heads of internal companies, divisions and major functional organizations, the executive officers bear responsibilities for operations and business results.

In this way, the Company clearly separates the responsibilities of Directors, that is, decision-making on and supervision of management, from the responsibilities of business execution. Some Directors hold concurrent positions as executive officers. The President has established the Executive Committee (in principle, convenes twice a month) and various other councils and committees to deliberate and report on important matters concerning the Group’s management policies and business execution.

Board of Corporate Auditors and Internal Audit

Corporate Auditors attend meetings of the Board of Directors and other important meetings, and monitor the Directors’ execution of duties through inquiries conducted by such means as the examination of important documents and requests for explanations of the state of business affairs. In principle, the Board of Corporate Auditors convenes monthly.

The Corporate Auditors regularly have meetings with the Accounting Auditor receive reports on audit planning, implementation status and audit content. Also, they receive reports on internal audit results by the Internal Auditors Office (consisting of ten members). The Corporate Auditors also serve as corporate auditors of core group companies to conduct group company audits as needed and attend periodic Group Auditor Liaison Meetings consisting of the group company auditors to deepen their understanding of each company. 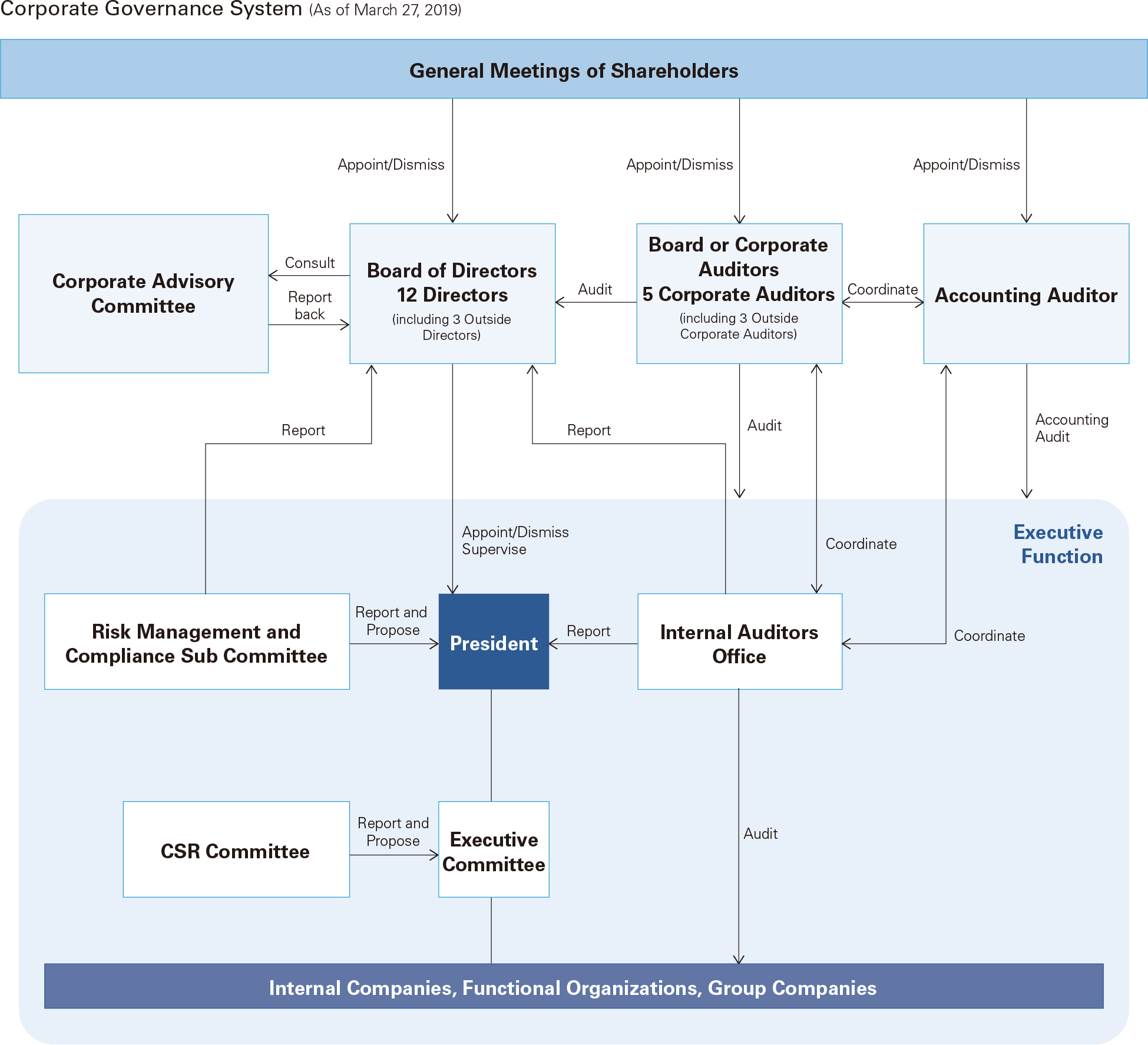 Independence Standards for Outside Officers

Policies for Determining the Remuneration for Directors

The Company abolished the bonus scheme to Directors and introduced a performance-linked remuneration system in July 2006, thereby strengthening the incentives of Directors for increasing the Company’s corporate value.
In addition, to respond to the increase in the amount of performance-linked remuneration in conjunction with the improved business performance, it was resolved to increase the maximum amount of annual remunerations to Directors from ¥450 million to ¥800 million (including ¥100 million annually for Outside Directors) at the Company’s 131st Ordinary General Meeting of Shareholders held on June 22, 2012.

Evaluation of the Effectiveness of the Board of Directors

Analysis and Evaluation of the Effectiveness of the Board of Directors

(2) Outline of Analysis and Evaluation Results

In light of the results from this evaluation, the Company will continue to examine and implement necessary measures to make discussions more lively and productive at the Board of Directors meetings.

The Company has set forth the policy on cross-shareholdings and standards for exercising voting rights pertaining to cross-held shares as follows.

Content of Examination on the Propriety of Holding Cross-Held Shares

In the fiscal year ended December 31, 2018, the Company sold all shares of 8 stocks and part of 1 stock of its cross-held shares. Additionally, as the result of an examination at the Board of Directors meeting held on February 21, 2019 of the economic rationality and significance of holding individual cross-held stock for the fiscal year ended December 31, 2018 (examination on cross-held shares as of the end of December 2018) in consideration of benefits and risks, capital cost and other factors associated with such holding, the Company plans to continue with the sale of some stocks.