In the Kuraray Group outside Japan, in addition to our efforts to save energy and improve yields at each production site, power outages caused by a cold wave in the United States forced some sites to temporarily suspend production. As a result, GHG emissions totaled 1,680 thousand tons-CO2e, a decrease of 136 thousand tons-CO2e from fiscal 2020 (The decrease includes equivalent to 33 thousand tons-CO2e of reducing GHG emissions by Unbundled Energy Attribute Certification). Since most of the electric power and steam at our production sites outside Japan are purchased from external suppliers, we have set an annual target (a year-on-year improvement of 1.0 percentage point or more) based on the intensity index using energy consumption rather than GHG emissions as an index to properly evaluate the results of environmental improvement activities. However, the energy intensity index in fiscal 2021 worsened by 0.3 percentage points compared to fiscal 2020. This was due to the forced suspension of production caused by the cold wave in the United States, which resulted in operations with poor energy efficiency.

The Kuraray Group’s total GHG emissions increased in the period from fiscal 2014 to fiscal 2019 due to the incorporation of businesses through M&A, such as the acquisition of the vinyl acetate business and the activated carbon business (Calgon Carbon Corporation). In particular, the acquisition of Calgon Carbon Corporation in 2018 resulted in a significant rise in the Kuraray Group’s GHG emissions. The GHGs emitted by Calgon Carbon Corporation consist largely of the CO2 generated as a byproduct in the process of producing activated carbon products. (Activated carbon is produced by burning a part of coal used in the process to form micropores on its surface. At this stage of the process, the carbon removed from the surface of the coal to form the micropores is released into the atmosphere as CO2. In this way, activated carbon emits a large amount of CO2 during production.) On the other hand, activated carbon is widely used as an indispensable product for the adsorption and removal of hazardous chemical substances contained in factory exhaust gas and for the purification of industrial effluents and raw water for drinking. Activated carbon thus contributes greatly to improving the global environment and reducing environmental impact. Going forward, we plan to establish a carbon dioxide capture, utilization, and storage (CCUS) system for CO2 generated as a byproduct in the production process. 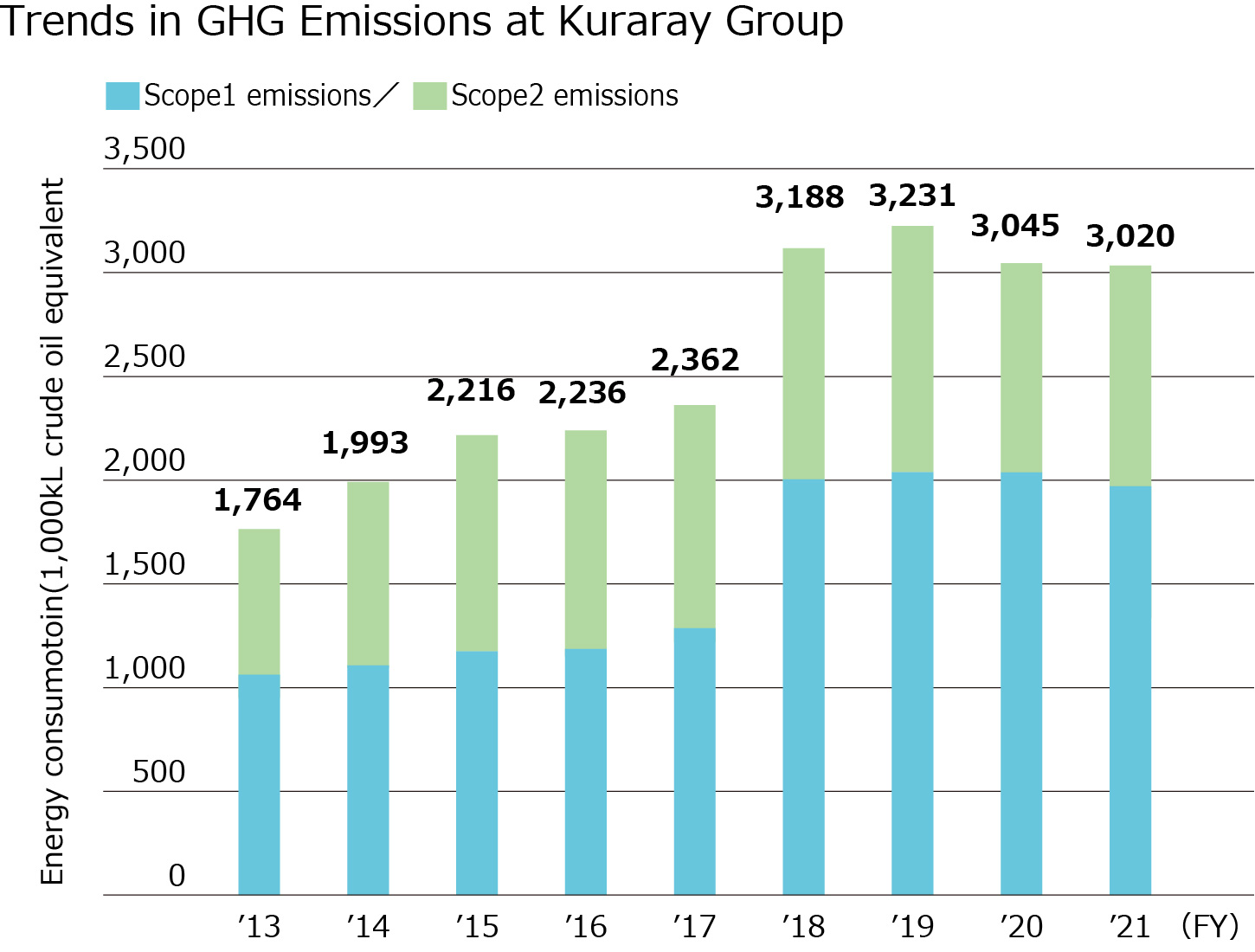 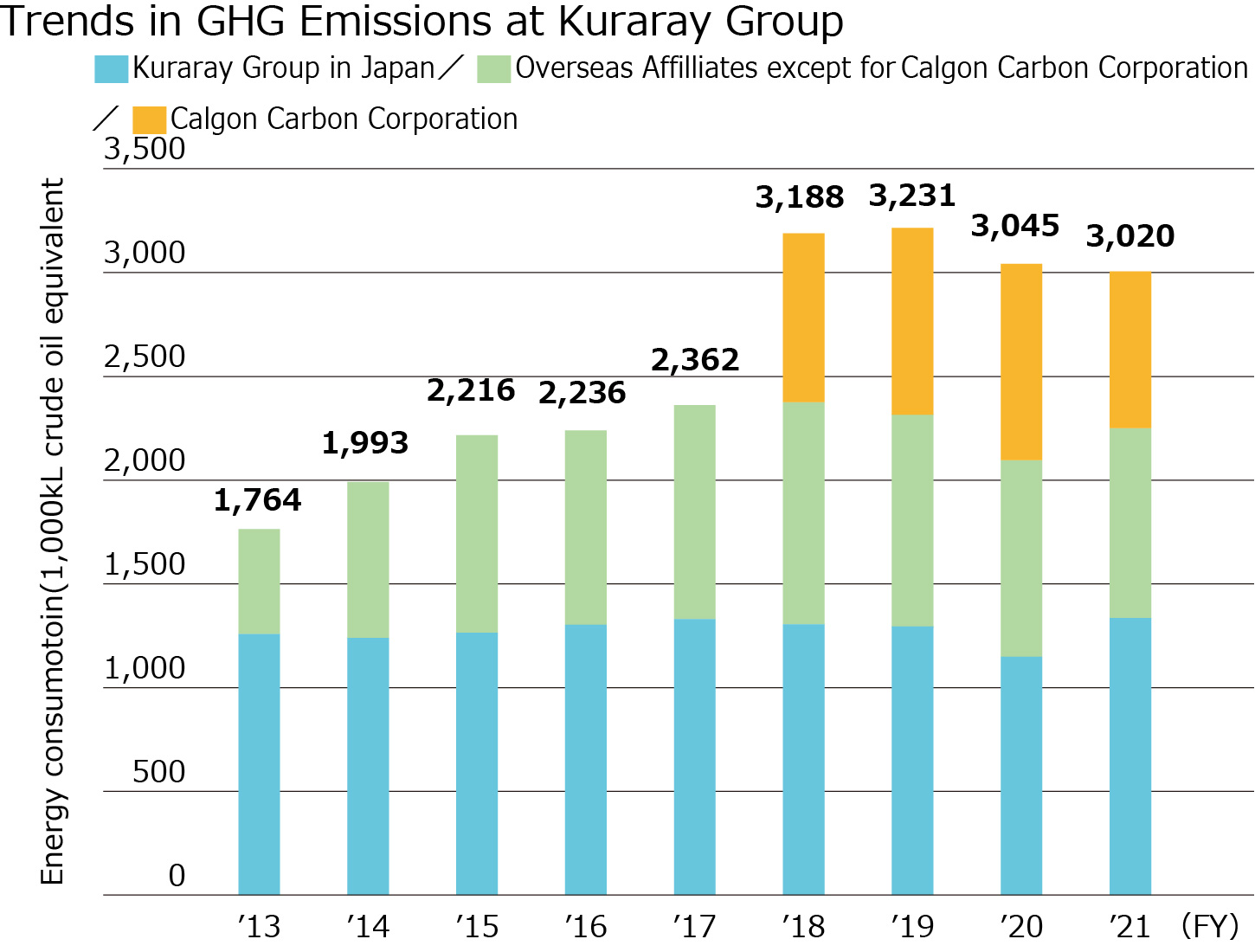 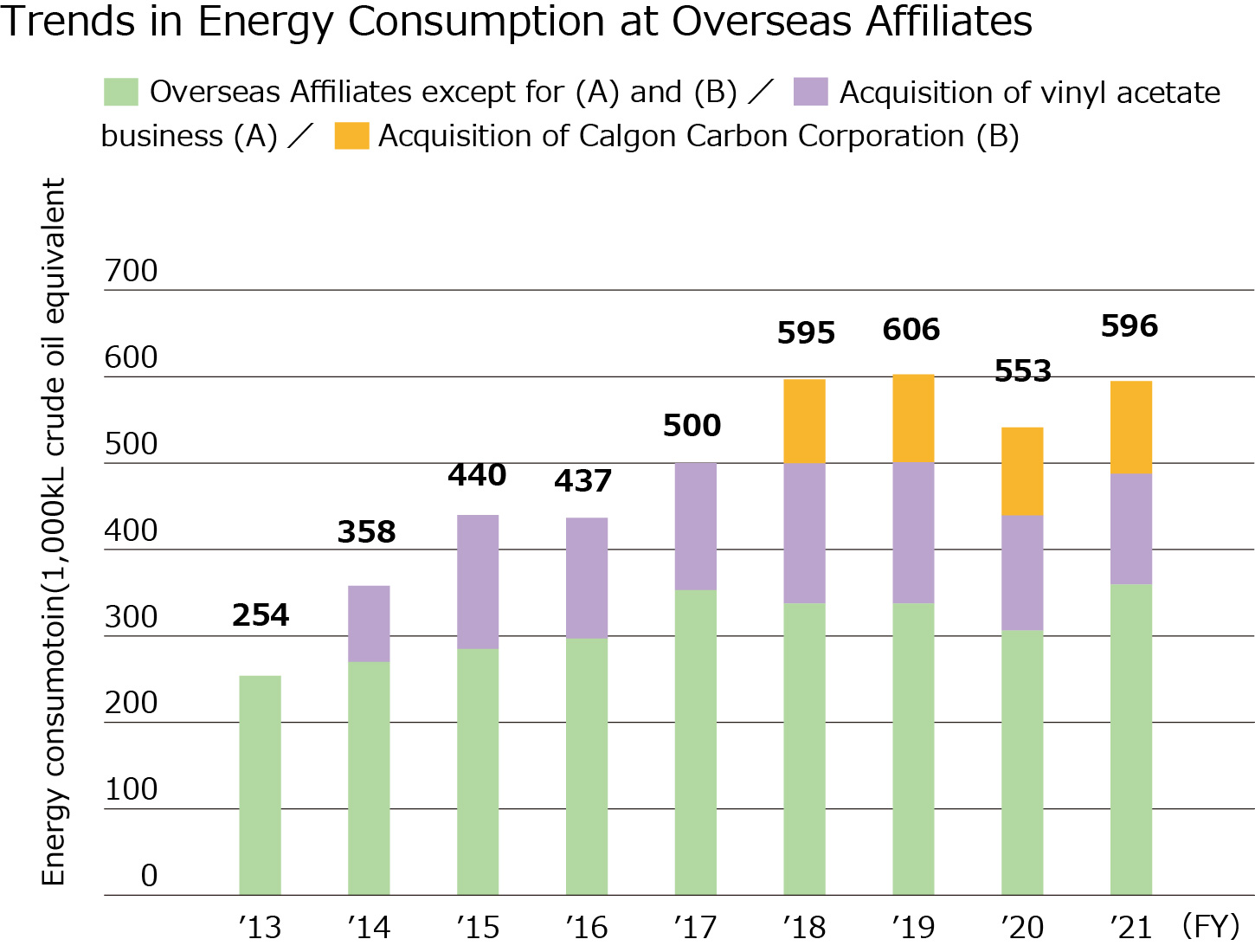 Mandated under the law by which businesses calculate and report Scope 1 and Scope 2 to the government, we report these figures for the whole Kuraray Group to the government and publish the results mainly in the Kuraray Report and on the Kuraray Group’s website. On the other hand, Scope 3, which means the GHG emissions based on the entire supply chain related to us other than Scope 1 and Scope 2, is indirect GHG emissions generated from the viewpoint of a life cycle such as raw material procurement, product distribution, product use and disposal as well as the direct emissions related to our business activities. Since fiscal 2013, we have made and are publishing Scope 3 calculations for some categories in the Kuraray Group in Japan.
Among the 15 categories in the total of Scope 3, we calculated actual values for fiscal 2021 for 5 categories [(1) to (5)] with a relatively large emission amount, excluding those not applicable to us and those having a limited calculation coverage in the products of the Kuraray Group. We will also continue to quantify our environmental contribution based on evaluations on the life cycle of our products.

We are working to reduce GHG emissions at the logistics stage, when transporting products to users. For example, to improve the efficiency of transportation by truck, we are consolidating the storage locations of products (warehouses) to ship products previously shipped from multiple locations from a single location. Through such large-lot transportation hubs, we are working so that products previously transported using multiple trucks can be loaded onto a single trailer. We also continue to pursue a modal shift, switching from trucks and other motor vehicles to modes of transportation with less environmental impact, such as freight trains and ships. In addition, in 2019 we submitted a declaration of voluntary activities in support of the White Logistics Movement being promoted by the Japanese government.