・Fiscal 2014: Actuals for 9 months from April to December + Actuals for January to March 2014 (or estimated value) [Partially overlaps with fiscal 2013]

The Kuraray Group in Japan has set annual targets for GHG emissions reduction measures and GHG emission intensity index in the current medium-term environmental plan, and is continuing its efforts.
Link to Carrying Out the Medium-term Environmental Plan
In fiscal 2019, we have been conducting CO2 reduction activities such as increasing biomass fuel volume, using waste plastic as a fuel, ensuring higher operating efficiency, installing energy-saving equipment and steadily performing energy-saving activities. As a result , we implemented measures to reduce greenhouse gas (GHG) emissions by 21,000 tons-CO2e (cumulative total reduction of 195,000 tons-CO2e since fiscal 2011), which exceeded the target of reducing at least 13,000 tons-CO2e of GHG emissions. As a result, although total GHG emissions decreased by 10,000 tons-CO2e from fiscal 2018 to 1,310,000 tons-CO2e, the GHG emission intensity index declined by 1.7 percentage points from fiscal 2018 accompanying lower equivalent production volume, failing to achieve the target of an improvement of 1% or more. The results were attributable to a drop in production volume of major products and a lower facility operation rate reflecting production problems.

On the other hand, the Kuraray Group outside Japan has been working to improve the energy intensity index (compared to production volume) by 1% from the previous year. The energy consumption of the Kuraray Group outside Japan was 606,000 kL (crude oil equivalent). This was due to an increase in production at some of the production bases of Calgon Carbon Corporation and MonoSol, LLC, as well as the restart of production bases that had been suspended due to problems. The energy intensity index decreased by 5.0 percentage points compared with fiscal 2018, and thus we fell short of the target. This result was affected by a significant reduction in converted production volume resulting from the switch from in-house production of intermediate products at some bases to purchase from outside the Group.
As a result of the acquisition of Calgon Carbon Corporation in 2018, the Kuraray Group’s total GHG emissions increasing by approximately 870,000 tons-CO2e, from 2,360,000 tons-CO2e in fiscal 2017 to 3,231,000 tons-CO2e in fiscal 2019. Calgon Carbon Corporation’s GHGs largely consist of the CO2 generated as a byproduct through the process for producing its activated carbon products. Calgon Carbon Corporation produces activated carbon using coal as a raw material. A part of the coal used in the process is burned to form micropores on its surface. At this stage of the process, the carbon removed from the surface of the coal to form the micropores is released into the atmosphere as CO2.In this way, activated carbon emits a large amount of CO2 during manufacturing. Activated carbon is an indispensable product for the adsorption and removal of toxic chemical substances contained in the factory exhaust gas and for water treatment (drainage, drinking water, etc.) and contributes greatly to reducing the environmental impact. The Kuraray Group evaluates the environmental impact and contribution of activated carbon throughout its life cycle. 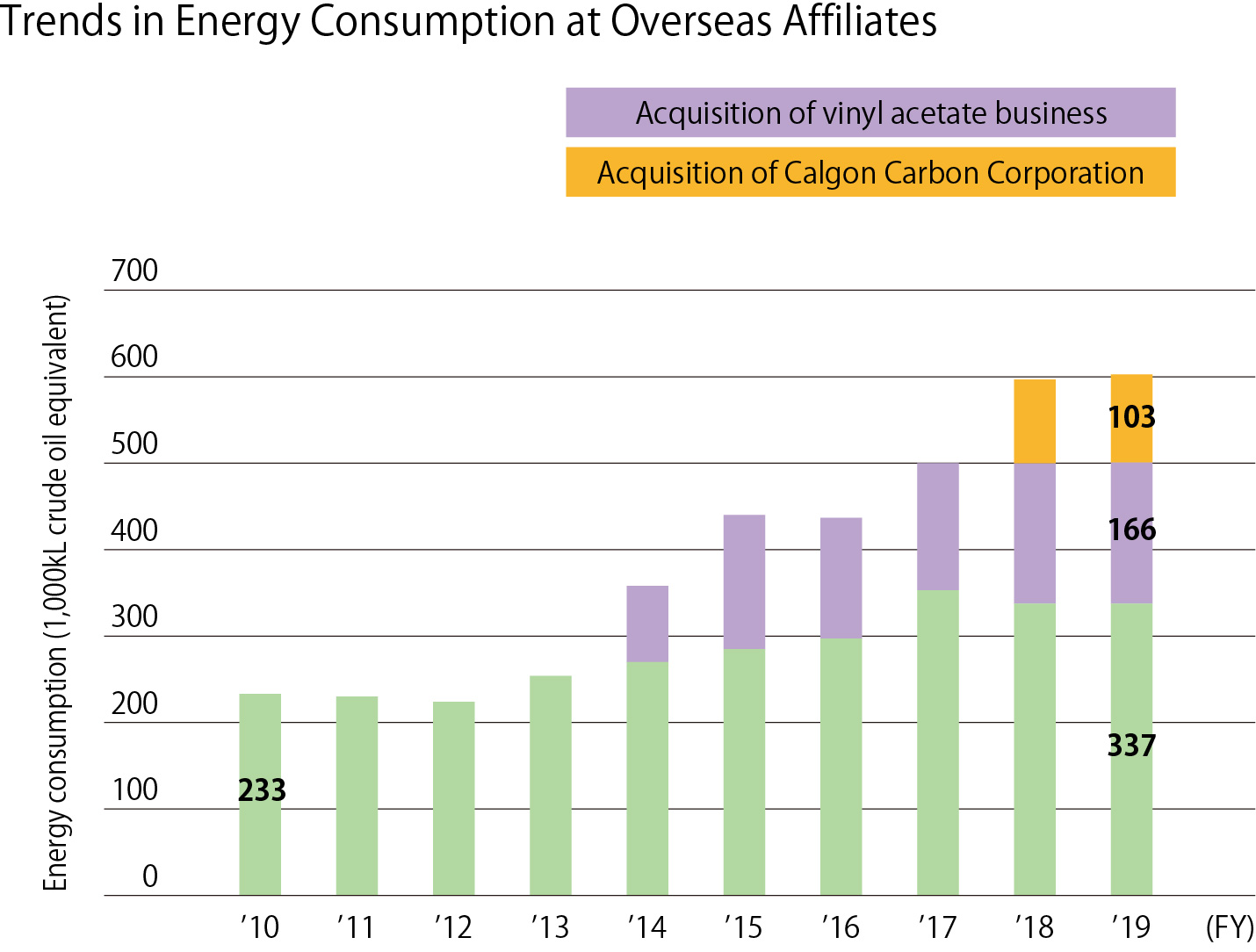 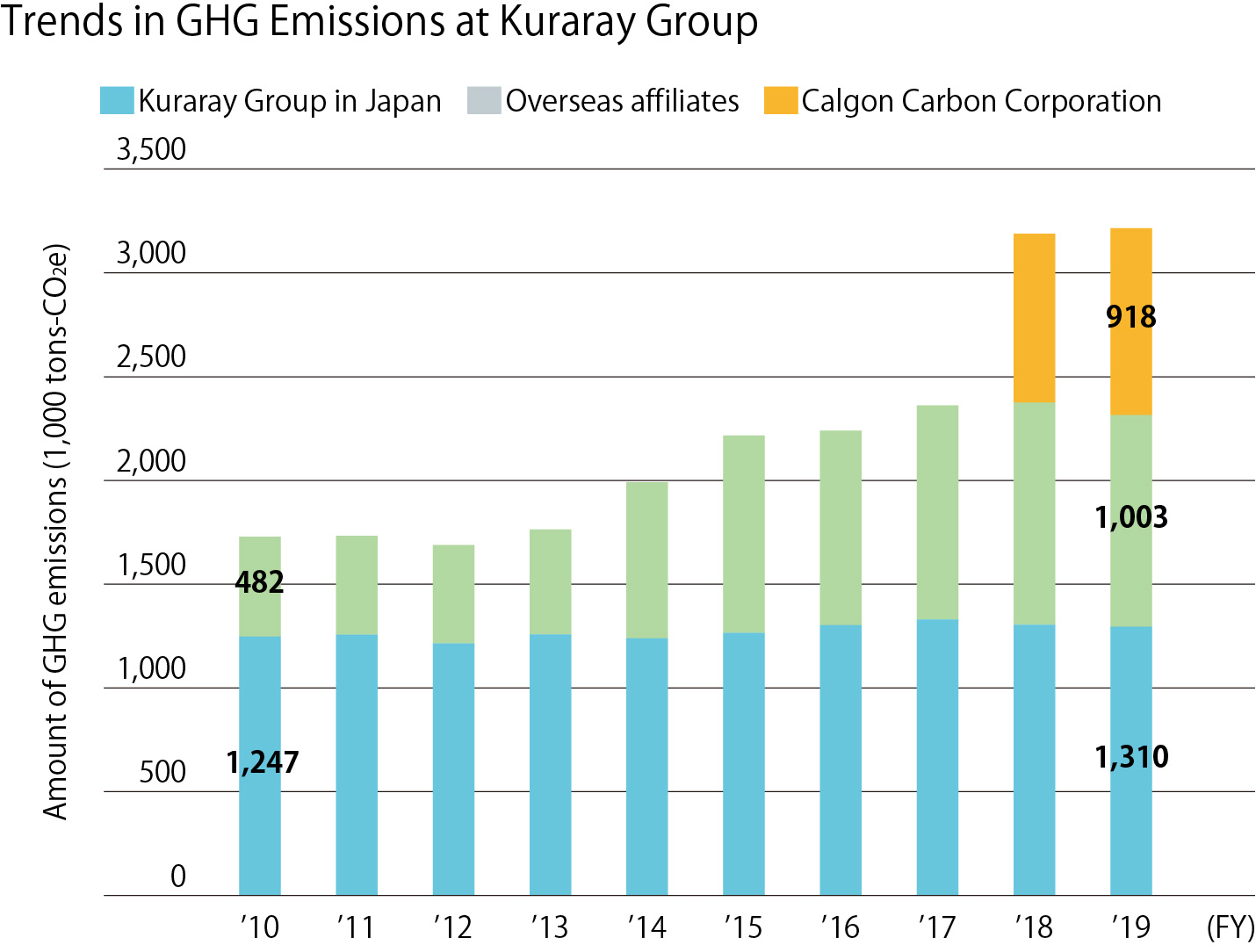 In recent years, the significance of across-the-board initiatives to reduce environmental load has become greater than ever before. In response, the Kuraray Group has positioned its involvement in climate change initiatives as one of the materiality issues that guide its sustainability activities, and is ramping up relevant efforts. Specifically, we consider these initiatives to be particularly relevant to the “effective use of resources and reduction of environmental impact,” a materiality item supporting the Company’s efforts aimed at “Creating Value to Strengthen the Foundation of Kuraray,” as well as “improving the natural environment,” another materiality item deemed essential to “Creating Value through Business.” Going forward, referring to the “Guidance on Climate-related Financial Disclosures 2.0” (TCFD Guidance 2.0), we aim to enhance disclosure advocated by the TCFD recommendations, namely on governance, strategy based on climate-related scenarios analysis, and risk management, as well as metrics and targets step by step..

The Kuraray Group will use ICP to incentivize energy saving, identify revenue opportunities and risks, and inform investment decision making, aiming to realize a low-carbon society.

The Kuraray Group has installed a power generation system for biomass fuel* (wood chippings from construction debris and other sources) at the Kurashiki Plant. The system can generate electricity stably even when compared with other renewable energy sources. In fiscal 2019, about 45,000 tons of biomass fuel was consumed, contributing to a reduction of about 67,000 tons-CO2e in its emissions. Going forward, the Kuraray Group will continue its efforts to reduce CO2 emissions through biomass fuel power generation.

* Biomass takes CO2 in from the atmosphere as it grows, and can be considered to emit no CO2 (carbon neutral) when the CO2 that is generated when burning lumber using biomass as a raw material is subtracted from the CO2 that is taken during its growth.

The Kuraray Group is also reducing its environmental load in the distribution stage of delivering its products to users, in addition to GHGs emitted by itself during the manufacture of products at its plants and other facilities. Kuraray is continuously active in the “modal shift” where the transportation means is changing from trucks to cargo trains, ships and other methods. As a result, its emissions of GHGs from products distribution in fiscal 2019 were 12,000 tons-CO2e. In addition, we endorsed the “White Logistics” movement promoted by the Japanese government and submitted a Declaration of Voluntary Action in 2019. As specific initiatives to improve transportation efficiency and reduce CO2 emissions, we are steadily promoting the integration of product storage locations (warehouses) to ship products shipped from multiple locations from one location, as well as the switching from the transportation of multiple trucks to one trailer, by increasing the size of one transport unit to a larger lot.

Mandated under the law by which businesses voluntarily calculate and report Scope 1 and Scope 2 to the government, we have been reporting these to the government and publishing the results mainly in the Kuraray Report and on the Kuraray Group’s website.
On the other hand, Scope 3, which means the GHG emissions based on the entire supply chain related to us other than Scope 1 and Scope 2, is indirect GHG emissions generated from the viewpoint of a life cycle such as raw material procurement, product distribution, product use and disposal as well as the direct emissions related to our business activities. We have continued to make Scope 3 calculations since fiscal 2013.
Among the 15 categories in the total of Scope 3, we calculated actual values for fiscal 2019 for 5 categories [(1) to (5)] with a relatively large emission amount, excluding those not applicable to us and those having a limited calculation coverage in the products of the Kuraray Group. We will also continue to quantify our environmental contribution based on evaluations on the life cycle of our products.